Percy Jackson and the Olympian Series  comes to life through quests which play out through the week as demigods traverse through the Cayuga Lake banks, ancient trails, and in the revolutionary war town of Aurora, NY. Demigod's are forewarned that Mount Olympus and the House of Hades is waiting for their visit and the monsters may be waking up from their winter hibernation to fiercely greet them this summer in Upstate New York.

You will not regret coming here/sending your children here! I will never forget camp, it’s the fondest memory of my childhood. -Demi Gods

Excellent, knowledgeable and caring people and instructors. My daughter had the most wonderful time and made lasting friendships from all across the world. A definite must for any curious child with an active imagination and a hungry mind.  - Anders O.

My son attending Camp Half Blood a couple of summers ago, and it was the one camp he's attended that he really liked and wanted to go back to. The activities are creative and open-ended, and the campers enjoy some freedom and some structure: going on quests, playing board games, playing soccer or another sport some afternoons, doing creative writing, learning some martial arts, trying new art media, and being encouraged to make and play and imagine in all ways.  - Dana C.

Camp Demigod is based on the fictional world of the ultimate Camp Half-Blood from the young adult book series “The Lightning Thief” (Percy Jackson and the Olympians). The young adult characters in the story are half-human and half-Greek god. We launched camp in 2013 years ago to support our then nine-year old son’s dreams about making the world a fun, safer and more loving place come true. Jacob (above) said, “I wanted to bring my own demigod character to life and make my story come true in a place where everyone was kind to each other.”  As the first and only overnight Camp Half-Blood experience, we worked closely with the original Camp Half-Blood, endorsed by renown NY Times Best Selling author of the book series Rick Riordan and founded by Topher Bradfield, Austin, TX.   Bradfield states, “Camp Half-Blood, Austin Branch feels that there should be more opportunities in the world for demigods out there to find a home to train as a hero, broaden their understanding of the world and become a part of a story that is uniquely their own.  Steve and Anne Berman understand our culture of literacy, creative problem-solving, and inclusion.”  “After speaking at length with Topher,” Drs. Steven and Anne Berman state, “we found there were so many commonalities in our mission to inspire children, that we decided to make Jacob’s dream a reality by creating Camp Demigod.”   As Jacob and the other Demigods grew up, we launched other more sophisticated themed camps:  Camp Fandom, Harry Potter Camp and DIGIVATIONS XGENS International Academy.

Following the adrenaline rush from the day's quests and busy slate of innovation and discussions of Ancient Greek history culture and mythology, both in English and Greek, followed by creative hands-on activities (art, music, drama), the nights will be spent keeping watch on the Camp, Demigod weapon making, combat training and deciphering clues for the next day. Capture the Flag and healthy desserts along with board games such as Magic, Dungeons & Dragons are followed by Cabin time and reading before sleep.  Another amazing part of the Camp after the claiming ceremony includes your demigod realizing their godly parent for the week where they discuss their quests, share common interests and create memories of a lifetime (laughter filled conversations under the stars and planets above is also part of the fun).
​
Please see the schedule and opportunities for optional private lessons from our international faculty. Throughout the week, world-class faculty and professionals offer semi-private and small classes in innovation/STEM subjects, computer coding/game design, fine art, music composition, creative writing, ancient cultures, linguistics and languages including French and Arabic taught by a young scholar originally from Morocco now living and studying in Paris, who may provide a virtual tour of Paris while teaching, and Greek taught by a young  scholar steeped in the knowledge of Ancient Greece, originally from Cyprus, now residing in Edinburgh, Scotland.

Quests in the Town and Lake

In previous years, a few times a week, it was necessary to travel into the town of Aurora to search for clues for the week's quest.   There may be trips to the beach for more combat training with swords and cooling off in the lake.  Friday nights, there is usually a celebration with a dinner and dancing.  The last night of Camp Demigod ends with star gazing when Demigods tell their heroic stories from the quest. 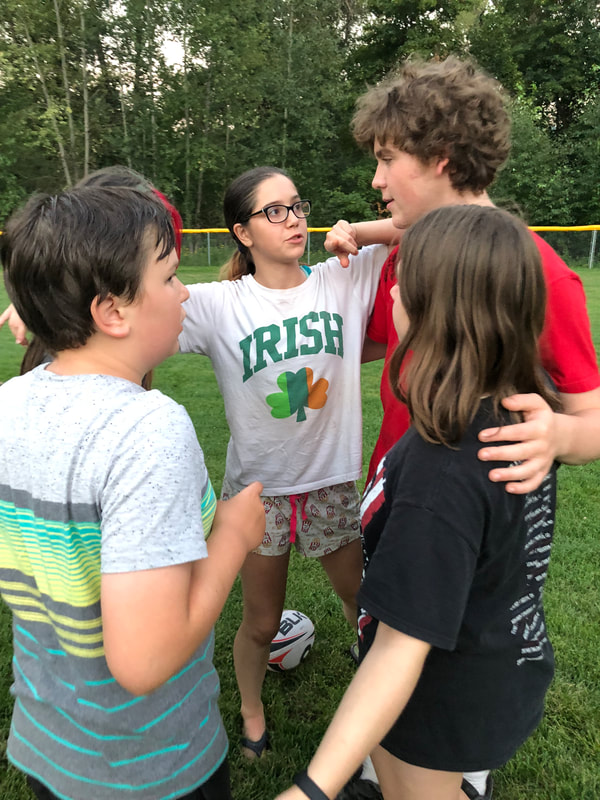 ​INSPIRING NEXT GENERATION INNOVATORS TO POSITIVELY TRANSFORM THE WORLD
​THROUGH EDUCATION, MENTORSHIP & LEADERSHIP